A large number of peoples working in Arab and many have dream to job in Arab countries. Lot of peoples are worry because of Sufficient (Khafil) System. Sufficient (Khafil) take the passport of his employees in his own custody due to which they can not find any other good job. Now you don’t need to be worry because you can jobs in Qatar independently.

In the whole world, the Arabs are severely criticized due to implementation of Sufficient (Khafil) system. Under which foreigners can not work independently and while they required the permission to leave the country. While the hosting of 2022 world cup Qatar promised that an alternative system will be introduced till May 2015. According to this, the foreign worker will be able to change his job at the end of the contract and on the completion of the contract; the foreigner worker will be able to freely leave the country within three days. On the behalf of any Sufficient (Khafil) the foreigner passport take by forced will be legal offense. Ministry of Labor said that the purpose of introducing these rules is the provision of basic rights of foreign workers. 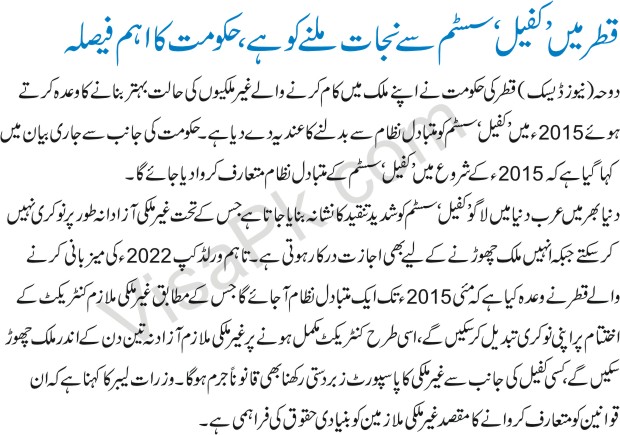 4 Replies to “Foreigners can independently jobs in Qatar”